Drury Stage Company is dedicated to the development and fostering of interest in the craft of theater among our youth. Also, the company seeks the encouragement and appreciation of inclusive community’s participation. This program mission is to empower and motivate young artists with collaboration and performance skills taught by performing arts educators in a supportive, rigorous and relevant educational environment. Our students will learn how to perform on the professional stage while building self-worth strategies and developing the courage to stretch. 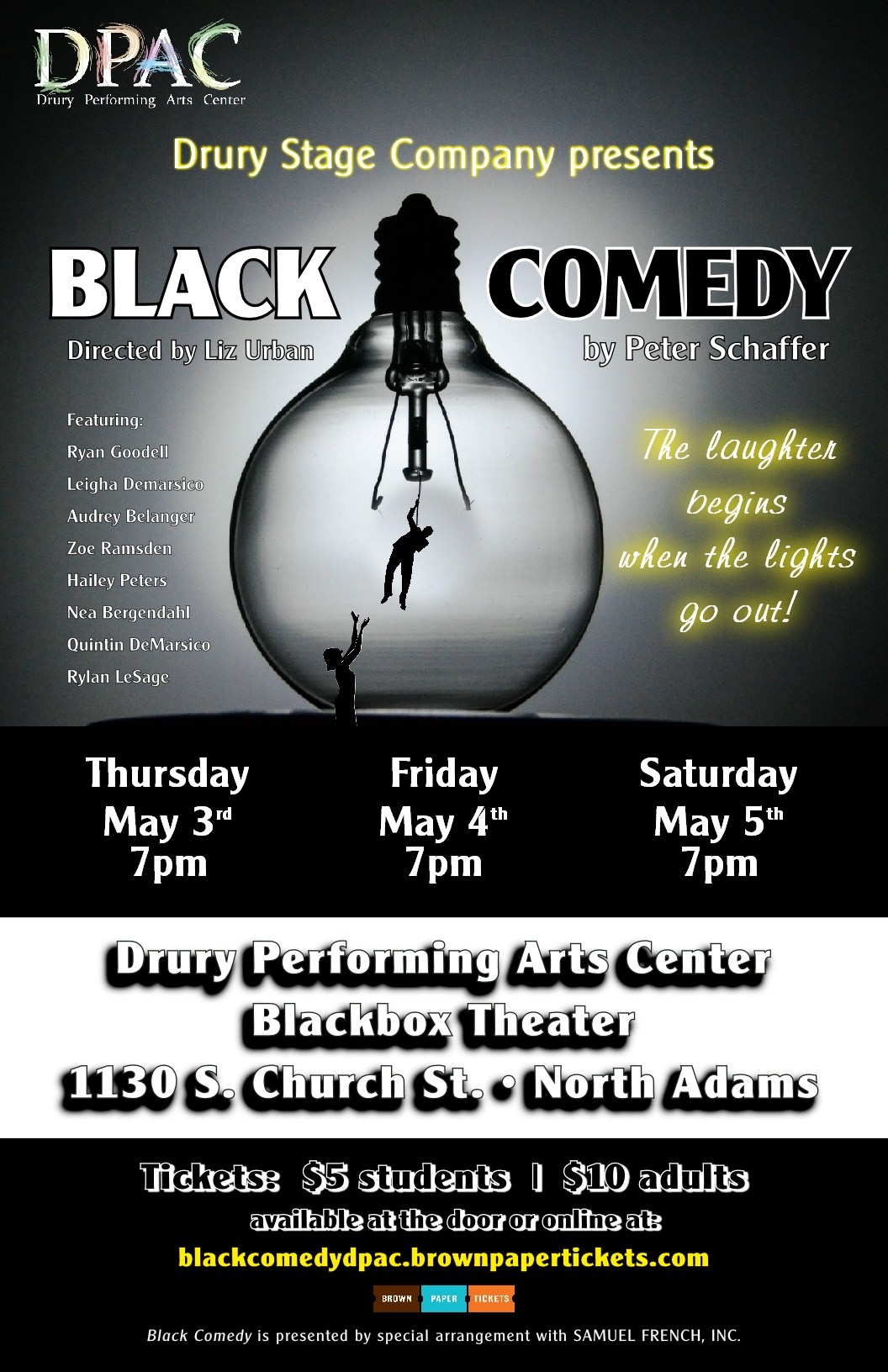 The Drury Stage Company is proud to announce performance dates for their spring production of Black Comedy, a one-act play directed by Liz Urban on Thursday, May 3rd, Friday, May 4th and Saturday, May 5th at 7 pm in the Drury HS Black Box Theater.

Black Comedy is a one-act farce written by Peter Schaffer which premiered in 1965. The title “Black Comedy” is a pun that refers to the majority of the plot that happens during an electrical blackout. It features a small student cast and a unique “reverse lighting” scheme.

This is director Liz Urban’s first production since taking over the Drury Stage Company in 2017. “This unique production has been so enjoyable to produce. The students have worked very hard and we are proud to present this unique one-act to the community.”

Join the cast and crew for this intimate production as they take the Blackbox Theater stage in the Drury Auditorium.
Tickets are $10 general admission and $5 for students with a valid student ID. Tickets for the show are available at the door or in advance at www.blackcomedydpac.brownpapertickets.com.
For more information, email pam@napsk12.org or call Drury High School at (413) 662-3240.
Back to the 80s - December 14-16, 2017
Back to the 80’s is a jukebox musical that tells the story of the 1989 graduating class of William Ocean High through the narration of Corey Palmer Sr., who is now living in the year 2001. The musical includes hits such as “Wake Me Up Before You Go-Go,” “Hey Mickey,” “Man in the Mirror,” “Love Shack,” “Walking on Sunshine” and many more. Come sing along and feel nostalgic about your favorite 80’s hits!!
Performances:
Thursday, 12/14 @ 7pm
Friday, 12/15 @ 7pm
Saturday, 12/16 @ 2pm & 7pm
Tickets
$5 students/ $8 adults  Presale
at the Door $7 students/ $10 adults
Get your tickets at the door or online by visiting https://drurybacktothe80s.brownpapertickets.com/ 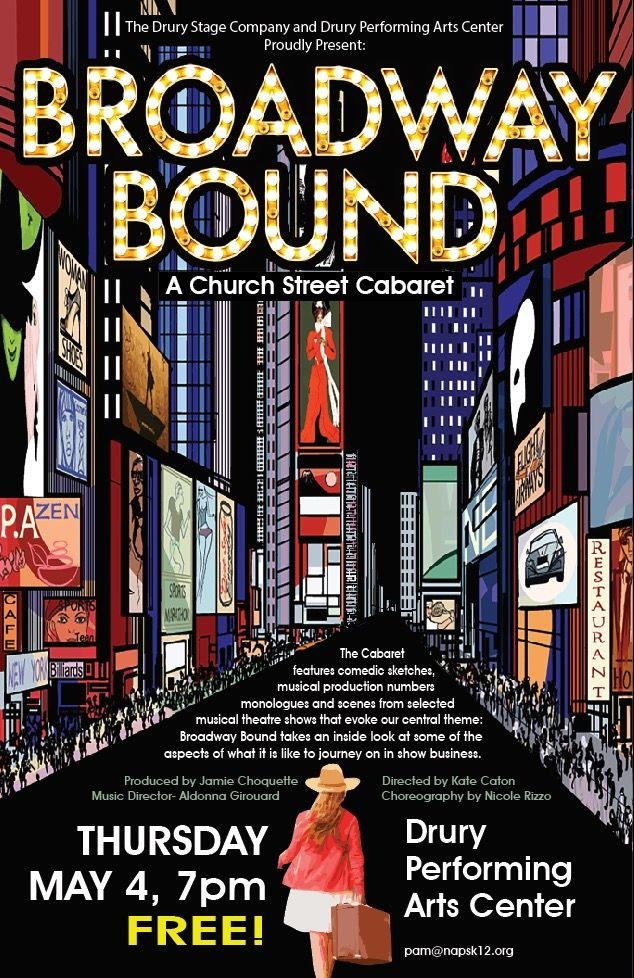 "Copacabana" by Barry Manilow December 1-3, 2016
The Drury High School Performing Arts Center presented Barry Manilow's "Copacabana" to the Drury auditorium Dec 1,2,3 of 2016.
More than 75 students involved in cast,  set design, crew and pit band took the audience to where "music and passion were always the fashion" when they perform the musical based on Manilow's 1978 hit song.
The musical, directed by DSC  Director Kate Caton, is about an aspiring songwriter writing about Lola who travels from Tulsa to New York City to break into showbiz. She meets Tony, a bartender, and composer, who falls in love with her and helps her become a Copa girl.
Featured seniors include:  Lola/ Samantha -  Alex Bernard, Tony/Stephen - Brodie Lesage, Chris Wolfrum - Sam Silver, Brian Christian as Willie, and Connor Meehan - Mc Manus and Carlos. Along with the other 23 member of the cast, we invited four elementary students from our three schools to share in the experience;
Alexis Girard, Elizabett and Zoe Ramsden and Piper Jacobs.
Adult cameo roles were added to the spice of the production again this year and they include: Dr.  Barbara Malkas, Amy Meehan, Tim Callahan, Chris Barbaratta and Mayor Alcombright.
Drury Stage Company raises the bar once again,  and this year, presenting 20 songs and 7 dances in this fun filled classic jukebox musical to a large audience every night.

In 18th century Vienna, music is the currency of power. And Court Composer Antonio Salieri is the toast of the town. That is, until a young prodigy by the name of Mozart comes on the scene. Reeling from the realization of his own mediocrity in the face of true genius, Salieri swears vengeance on the God that gifted Mozart’s breathtaking talent. Swells of music and madness stir through Drury Stage Company’s epic new revival of the Tony Award-winning drama that raises the question: how far would you go to secure your legacy?

Drury Stage Company is the first regional high school to present this award winning revival to the Berkshire communities. Nick Burchard plays a riveting Antonio Saleri while Jacob Keplinger balances the dramatic tension  of the play with his comic interpretation of Mozart. Alex Bernard play his supportive wife Constanze. Joseph II is played by Chris Wolfrum as is the aristocracy performed by Evan O'Dell and Michael Mazzu,  Venticelli weave in and out of the story and they are performed  by Amanda Michaels and Leigha Demarsico. Other cast members include seniors: Alyssa Richardson, Destiny Gallagher, Chris Andrews and  Elliott Eastman.

For a video recording of "Rocking the Boat" please follow this link to view it on Youtube.

North Adams, MA, November 13, 2015: This December, The Drury Stage Company presents Frank Loesser’s hit musical “Guys And Dolls”. Guys and Dolls is a musical comedy involving the unlikeliest of Manhattan pairings: a high-rolling gambler and a puritanical missionary, a showgirl dreaming of the straight-and-narrow and a craps game manager who is anything but.

Set in the Manhattan of Damon Runyon’s short stories, Guys and Dolls tells of con-man Nathan Detroit’s efforts to find new life for his illegal, but notorious, craps game. When their trusty venue is found out by the police, Nathan has to find a new home for his craps game quickly - but he doesn’t have the dough to secure the one location he finds. Enter Sky Masterson, a high-rolling gambler willing to take on any honest bet with a high enough reward attached. Nathan bets Sky that he can’t take the “doll” of Nathan’s choosing to Havana, Cuba with him on a date. When Sky agrees to the bet, Nathan chooses uptight Evangelist Sergeant Sarah Brown, head of Broadway’s Save-a-Soul Mission. Sky thinks he’s been duped, but he’s in for even more of a surprise when his efforts to woo Sarah are so successful that he falls in love with her himself! Guys and Dolls takes us from the bustle of Times Square to the dance clubs of Havana to the sewers of New York City as it demonstrates the great lengths to which a guy will go when he truly falls in love with a “doll.” Guys and Dolls features some of Frank Loesser’s most memorable tunes, including the hilarious “Adelaide’s Lament,” the romantic “I’ve Never Been in Love Before,” the exuberant “If I Were a Bell” and the classic “Luck be a Lady.”

This show is completely produced by the Drury Stage Company and the Drury Performing Arts Management class, a rigorous academic course that challenges students to produce and curate all performing arts events at Drury in the newly designated DPAC (Drury Performing Arts Center). Past productions include Grammy/Tony winner Duncan Sheik, original J. Geil’s Band Bassist Danny Klein, folk/pop duo Ryanhood, as well as Drury’s productions of Mozart’s Requiem, Pink Floyd’s Dark Side of the Moon, and The Music Man.

Tickets are available online at: dpacguysanddolls.brownpapertickets.com. High school student tickets are $5 while general admission tickets are $7. The show will take place on December 3rd, 4th, and 5th at 7PM, with a matinee performance on the 5th at 2PM.

A reminiscent voyage back in time, a tribute to the significance of the genre in our  local history, including, vintage comedic sketches, musical interludes, production numbers, radio plays and novelty acts to be held at the DPAC auditorium  on May 28, 2015.

Unique acts, such as illusionists, comedians,  pantomimes, jugglers, and male/female impersonators. Specialty acts should prepare (no longer than) a five-minute audition.

Individuals coming to act will read from a comedy sketch or commercial .

Individuals coming to sing will sing 1 verse of  a song of their choice.

Individuals interested in working on the show in any other capacity (crew, tech, makeup, hair) are encouraged to attend or to get in touch with us by the audition date.

Please feel free to contact Kate Caton with any questions.

Mark the audition date. See you then!